I took this photo in Zanzibar. 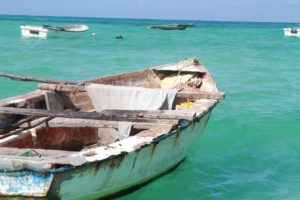 I was watching the boats, many in tatters, always ready to set sail again after they returned to shore, regardless of the condition they were in. At the moments they were about to leave shore, they appeared larger than the ocean, even though the tilted horizon looked full of uncertainty. There was little time and space for dreaming, represented by a very small space for the sky. The reality, represented by the ocean, dominated the space. The boat, anchored against a corner, conveyed a sense of solidness and certainty. But a sensitive viewer would know that sense of solidness and certainty is an illusion. The other boats seemed to be floating around aimlessly, with no purpose.