We hundred milers only managed to cover a bit over 160km of this track, but boy oh boy, wasn’t it a stunner?! The track is very well maintained, a mix of single, fire trails, sun exposed boulders, dirt tracks, dams, and bushland. Wild flowers were out en masse covering the landscape with bright colours. We had a bit of everything, heat, thunderstorm, lightning – nothing big but enough to spice things up. Flies and mozzies were also out in force to cheer on trailrunners.

Various runners had sightings of roos, pigs, kookas and different sorts of birds, snakes, lizards of different sizes, scorpions, and spiders – light emitting, light reflecting, or the dark types. The most memorable plant for me was the spiky bush that hissed like a snake through branch movement as our legs brushed past them in the dark.

13 runners started in the hundred miler. Most of them bolted out when the gun went off at midnight (figuratively). I was back of the pack with Darlene. The aim was to finish the race within cutoff. Being a good looking sort, she only agreed to run with me because there was some lightning and threats of a thunderstorm about 7-10kms into the race 🤪 You see, I am a bit taller, and used hiking poles with metal bits on them. It would have been easy to make associations with the lightning!

Darlene carried one of those Garmin bricks with a map. It was our safety net against wandering aimlessly in the bush. I am not exactly a bushman, though I sometimes sound like one, and navigation in the bush with sleep deprivation has never really been my forté.

For me, the race was obviously hard due to sleep deprivation, hilly terrain, and unfamiliar distance range. At least now I do not need to be convinced that 100 miles are really a long way away!

But anyway, with the help of wonderful supporters including children, pacers and sweepers, Darlene and I made it to the finish, under a welcoming arch of human arms. Such kindness from a generous bunch of people! Many of them had to wait for many hours for us to cross stations. Specifically, I would like to thank my dear troops at home for holding the fortress during dad’s absence, Shaun and Jon who organised the race, Darlene my running partner in crime, Kelly-Lynn and her husband, Raquel, Sophee, James, Tod and other pacers who gave up so much of their own time and sweat to do some exercise in the bush with us. The vollies are the backbone of races like this, and in this event, the Feral Pig, it is no different. I met some of the most amazing folks here through this race. 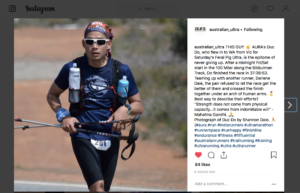