Friends, I feel like I owe you this reflection after the race. It is not a race review, as I didn’t make it far enough to write a review. The seasoned runners amongst you know that running is not just about the numbers but also about what goes on behind the scene. If you are all about hard numbers and personal bests, for your own sanity, you’d better give this long and tedious post the flick. If you’re not an endurance athlete or not married to one, I suspect much of this post would also be meaningless. 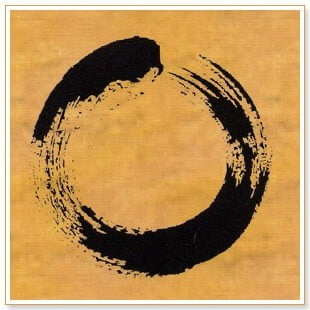 Despite all the great things that Italy has been offering, you know what I miss the most right now?

I miss the opportunity to watch my older son performing his first solo with an orchestra tonight. His solos over the past few years have had piano accompaniment. Whenever he played with an orchestra, he has never had a solo part. Musicians know this is a big moment in their performing progression, and naturally as his mentor and biggest supporter, I’d have loved to watch the performance in person. 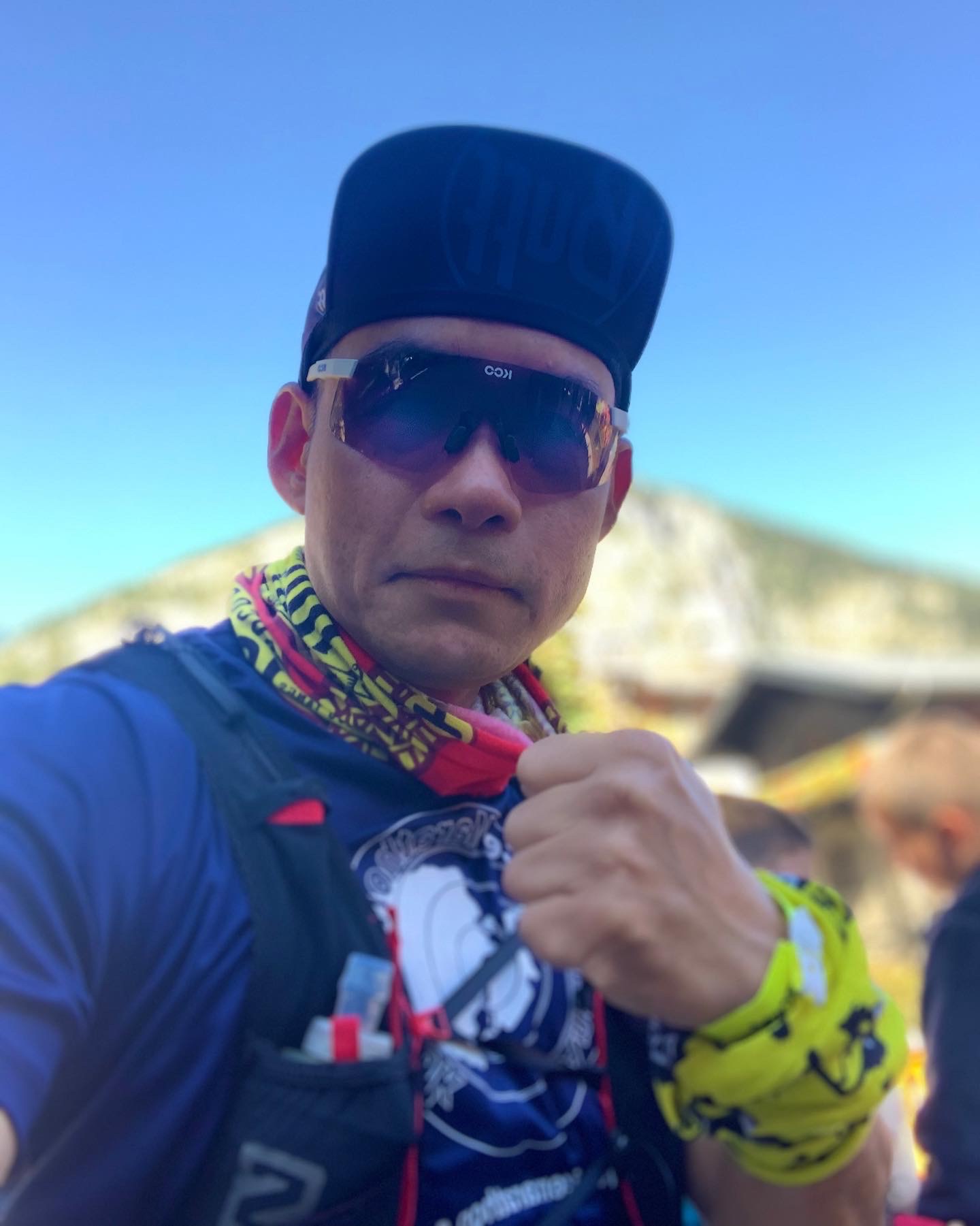 What has this got to do with running, you ask? Of course, it has everything to do with it. The moment you start separating running from other parts of your life, you start creating frictions. Those frictions could be subtle and barely noticeable at first, but they would definitely become heavier over time. That, of course, applies to any other activity that you invest substantial energy upon, not just running.

Somebody new to running tends to look at this sport as a one-dimensional thing, maybe a health thing, a mental challenge thing, a social thing, a nature thing, a meditation thing, and so on. Over time, the runner realises that running is merely a key which opens up a complex world with intersecting dimensions. Then she notices that the context of the run is as important as the run itself – how the run fits into her particular day, the challenges of making the run happen, how she handles the pressures from the run, the people she encounters, the ground her feet strike, the sky over her head, and most importantly – her presence. She, at her higher level of maturity as a runner, knows that her presence cannot be separated from the presence of others, and collectively, it makes the run what it is. 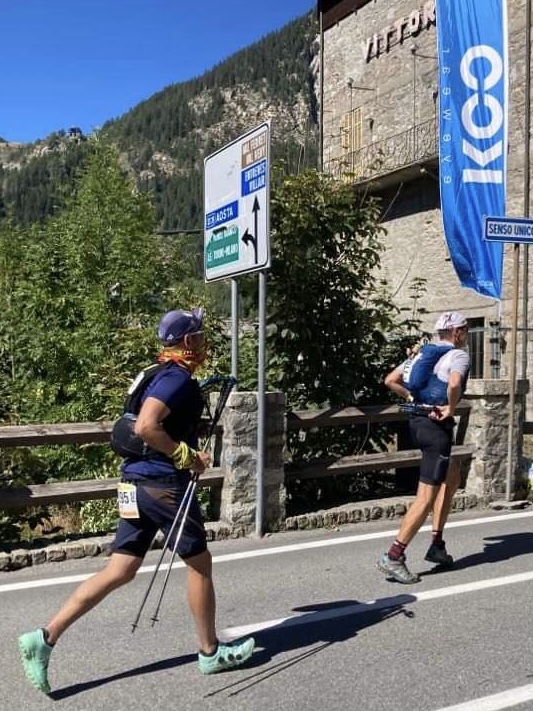 I had my solo-with-an-orchestra moment at the TOR 2 nights ago, only hours before injury struck.

An orchestra complements, accentuates and completes the soloist. Although running is mostly a lonely endeavour, the runner would not be complete if she failed to connect with the context of each run. The people, the scenery, the runner’s own struggles and triumphs, nature, what goes on within and without – all of it forms the runner’s orchestra.

When I was toiling up Col Haut Pas (2,857m) then Col Crosatie (2,829m), the rock-laden switchbacks and alpine steps were engulfed in darkness. But as soon as I reached the peak at Crosatie, the harvest moon revealed itself in all its striking glory. The moon up this high was large, towering, golden, bright and completely still. I knew that a phone shot would not do it justice, so I refrained, out of awe and respect. The sight of course was beyond words. Like tasting honey for the first time, you’ve got to experience it for yourself to know what it’s like. From my perspective, the first photo in this post is the closest to what I saw up Col Crosatie. 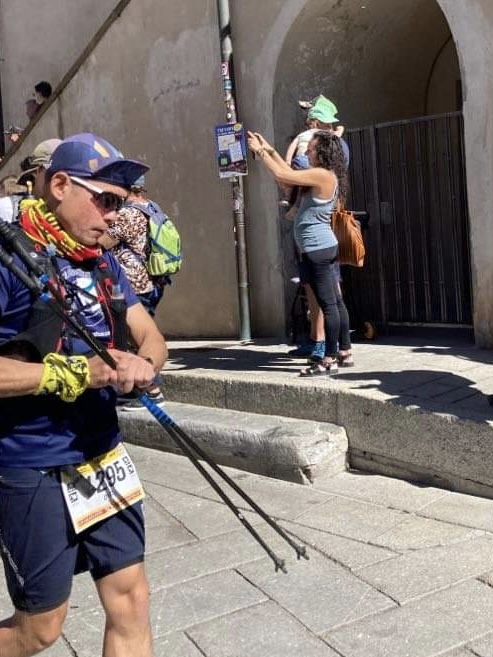 I took a moment to admire the revelation. Before the run, I had written this: “We learn Humility. We learn Awe. We learn Amazing 🪷 💎 🪷 That, I already know. The rest, I’ll have to find out by running the race.” Those words literally fulfilled themselves at that moment. A sarcast may shrug this off as a self-fulfilling-prophecy fallacy, but that would be the choice of someone whose abode is in the realm of binary logic. This universe and how it functions is beyond this confined sphere of understanding. Just study Tesla, Einstein and numerous other renowned scientists.

In that moment, I thought of a few people who crossed my path at the TOR. G, from Germany, who burst into tears seconds after we said hello. She was dealing with the loss of her mother last year and was talking about her fear of running this race. I didn’t see any fear in G. I only saw authenticity and bravery. T, from Canada, who was dealing with the loss of her husband, also last year due to covid. In a matter of hours dodging a railway strike, sharing a bus ride to Aosta and hustling for a beer where there was no bar, T had come to understand me enough to send me this message after the race: “After our conversations on the train, I expect that you are in a good place with your decision”. M, from Colombia, about whom I had written a short story only last month after running the Clint Eastwood, weeks before I met the real M. The main character in my story resembled M down to the dot in the I and the cross in the T. M was dealing with the fragility and fickleness of human character. G, from Ireland, who could crank out a sub-3 marathon and sub-8 100km for breakfast, who realised that these mountains were not for him. There are many wonderful things in this world, but many of them are not for some of us. That goes for these beautiful mountains too. 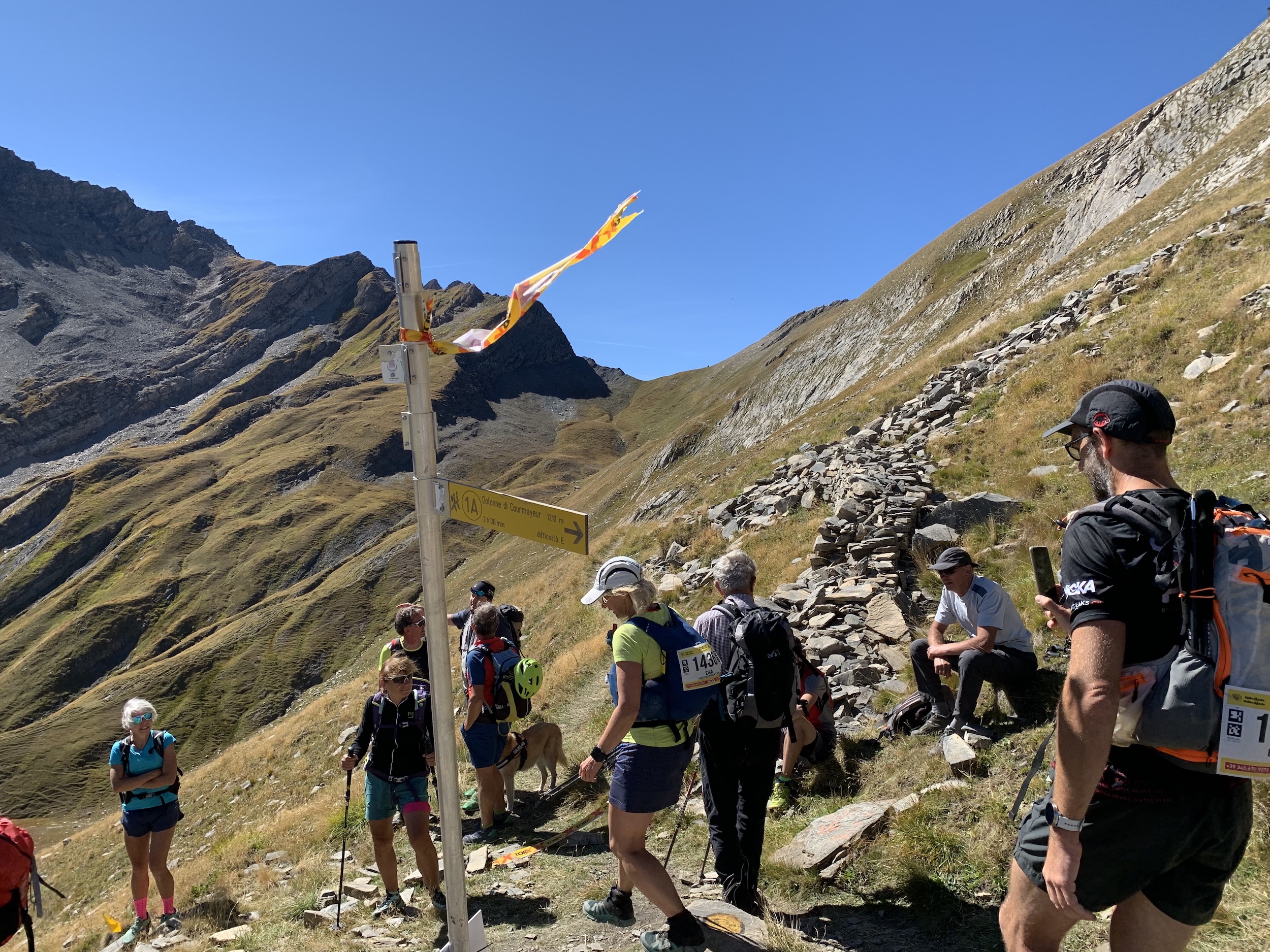 C, a veteran with 3 TOR finishes under his belt, who, with blood all over his face after a mishap on the hills, decided to stop out of respect for the TOR. People like C simply do not give up, so there was a lot of weight behind this call. I saw self respect in his decision. M, from Holland, who was huffing and puffing behind me after the first 2 climbs and looked out of sorts, who – as I write this – is still in the race getting stronger and stronger. Unknown-san, from Japan, who carried the heaviest pack I saw in the race. With all the stuff in that pack, he probably could finish the race without relying on the aid stations. He had performed a little ritual with dolls, a small cake and fire at the start line. Everyone has their stories. Sometimes they reveal themselves to us. Sometimes they don’t, and I’ve learnt to not assume anything about people. It is very difficult, if you look hard enough, not to notice something truly amazing in each of us 🙏 Humility. Awe. Amazing. All in one moment. I felt like a soloist with a full orchestra behind me. 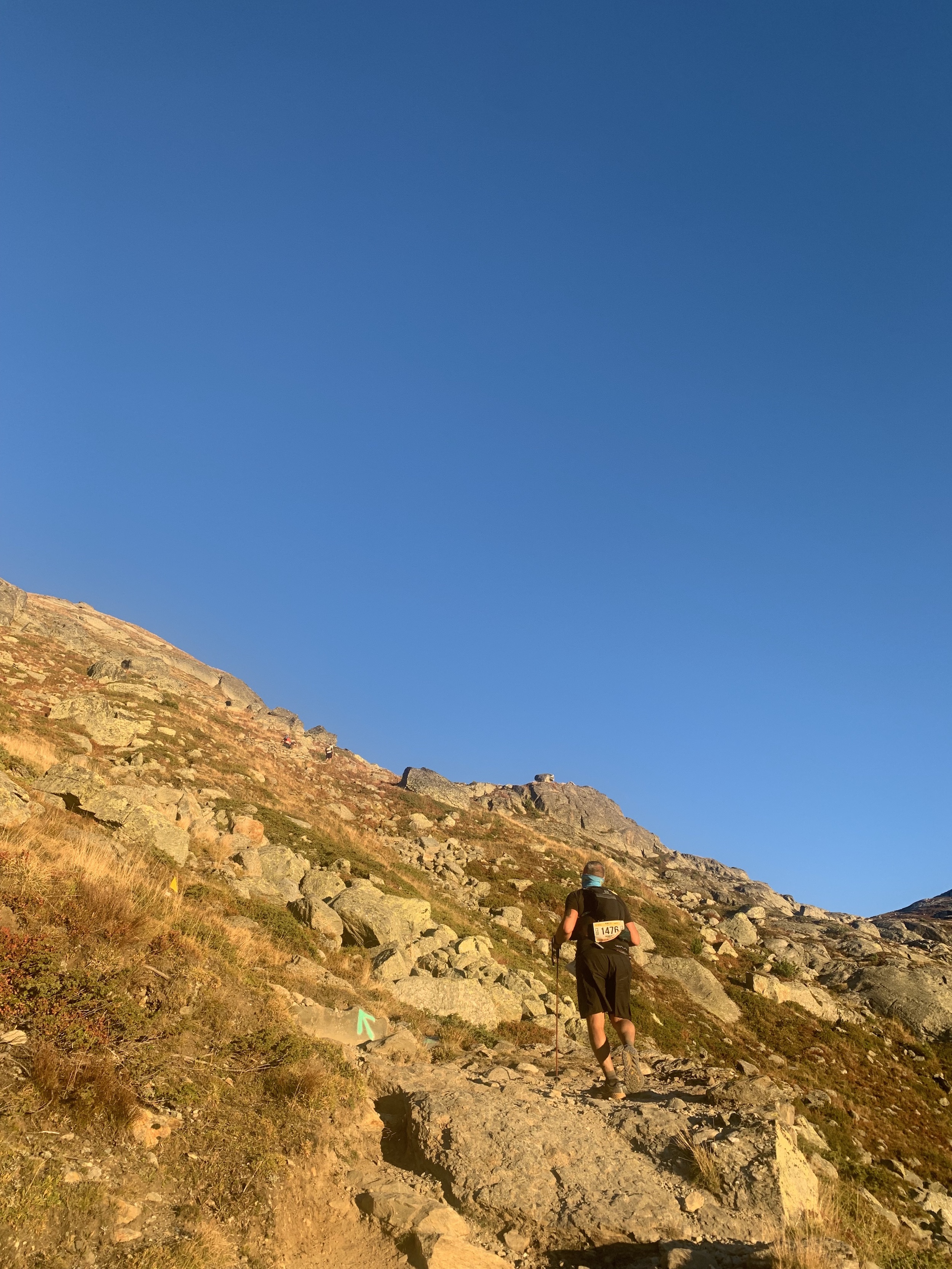 Then I started making my way downhill, expecting to make up for some slower sectionals climbing up the cols. I quickly realised that the down was going to be as slow as the up. With so many boulders and rocks of different sizes, I had to remain very focused not to put in a wrong step. I had my head torch switched off, as the moonlight was sufficient. After a few hours pounding on the hard rocks, my knees were feeling it. Whenever the sharp pain on the right knee intensified, I would sit down on the rocks to ease off the pressure. A few runners paused to check if I was ok. I wasn’t feeling ok. But these runners were facing battles of their own, and I wouldn’t want to disrupt their rhythm. “I’m just resting. Grazie. Vai! Vai!”, I said. There is a point in any struggle when you realise that the cards are not falling your way. Then you learn to take refuge in Grace and accept the situation. The competitive might call it “giving up”. Perhaps they’re right. For me, it was simply making a call you had to make and could live with. “Be in a good place with it,” as T said. That point came for me when a few runners passed me like the wind. I knew they were not moving that fast, as they had been behind me all the way. Yet to me at that point of the struggle, they were moving like mountain goats. I had been on track for a 5hr buffer from cutoff when arriving at the life station in Valgrisenche. That buffer quickly reduced to less than 2 hours. 2km away from Planaval, on a runnable stretch but still moving at close to 30min/hour, that was when I pulled the pin. 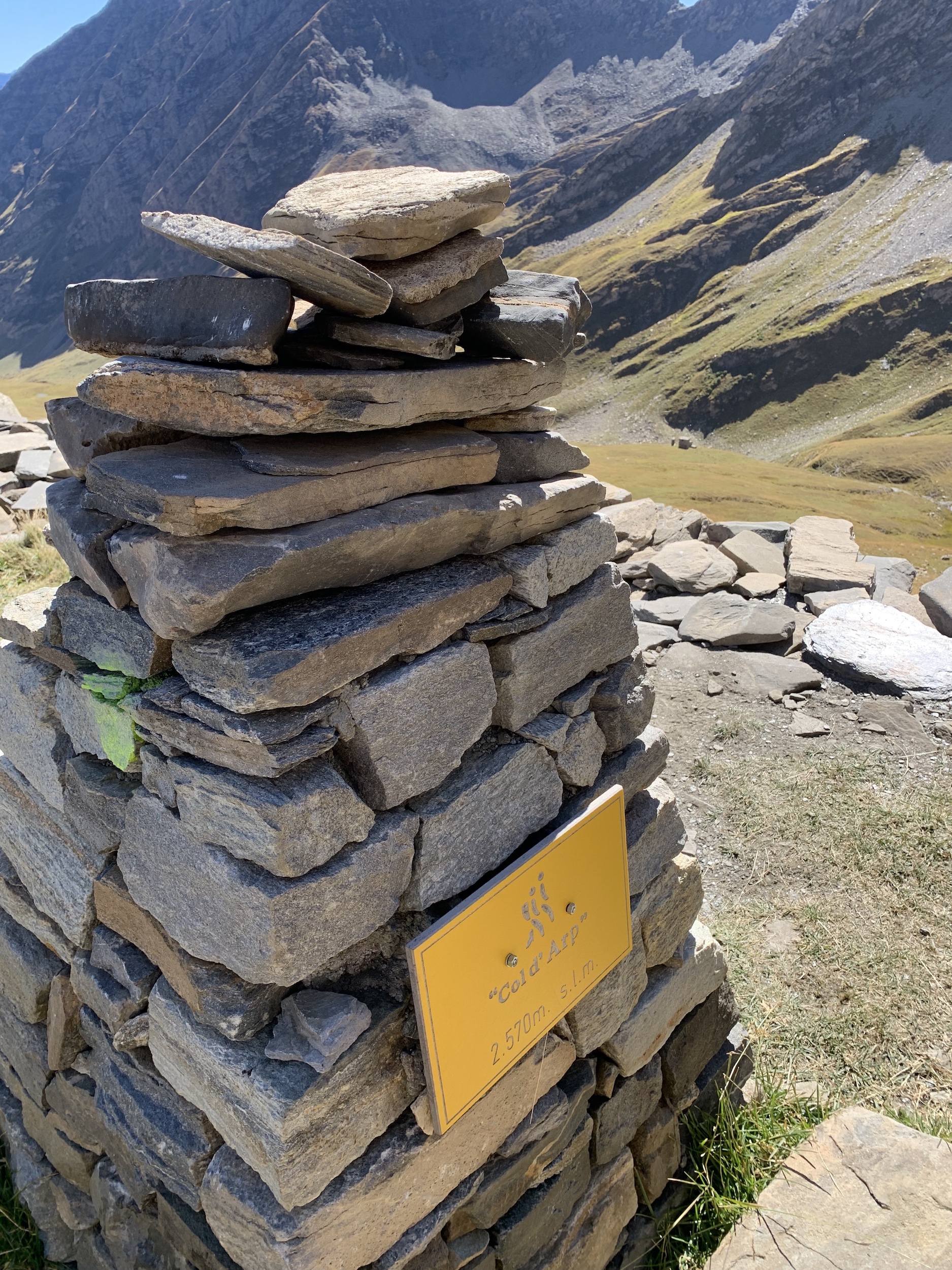 That decision mattered in the context of the race itself, but I realised that in the grand scheme of things, it did not matter that much. Some people need to climb 26 hills to get what they want. I needed to climb only 4.

The finishers of this race are true giants of alpine racing. I tip my hat to them all. But we all learn to finish our races our own ways, sometimes not shown in numbers. Everything matters for the soloist to excel, yet nothing matters as the soloist’s presence is inseparable from the orchestra’s. When one realises this, Life is simplified to Humility – Awe – Amazing 🙏 Perform well tonight, Hunter 🎶 🥰